Fully Distributed: What We Learned From Organising a Whole Company Conference

We’re a company made up of international remote teams. Here’s what we learned from our first offsite get-together. 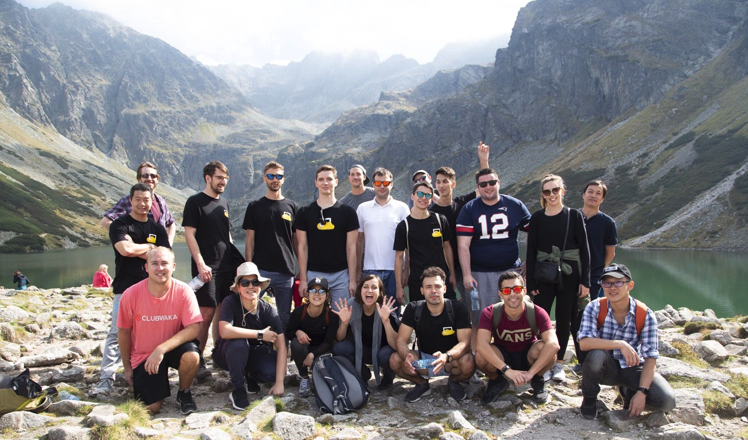 We’re a distributed company. We have people based in America, Europe, Africa and Asia. We also have a couple of offices, which we think of as ‘hubs’, in London and Bangkok. This means that we have a mixture of people who work from home, work from the office, or do a combination of both.

Having people based all over the place in different working environments makes it even more important that we get to meet up physically once a year. As a company that has just turned 3 years old, we decided that this was the year to start: we had enough people (about 35) and so we opted to fly everyone to Kraków in Poland, then take a 2 hour bus ride to the mountains in Zakopane. This is what we learned.

As Founders, we’ve run distributed teams for almost 15 years under different guises. And anyone who was worked for a company where people are based at different sites will recognise this. We know from experience that you have to stamp out any hint at people behaving in a way that suggests that ‘the people located in x are in some way different to the people located in y’. One way to achieve this is to put them in the same physical place for a bit. It’s obvious, but people see that we’re all individuals who aren’t defined by where our desk is. And whilst we all know it, sometimes it’s good to be reminded.

By making it a ‘thing’, it takes on a life of its own and people start referring to it as an entity. Rather than ‘the company trip to Poland’, we called it ‘ScreenCloud Together’. We gave it a logo and printed t-shirts with it on. We created a public room on Slack and referred to it as ScreenCloud Together in our monthly All Hands. Everyone knows what it means and next year, when we go away again, it will still be ScreenCloud Together, just in a different location.

It’s not about the Founders

Our monthly All Hands is generally used by the Founders to talk to the company and invite questions. We were keen not to make this a kind of All-Hands-On-Tour conference, because that’s not what this is about. Instead, we got up at the beginning and welcomed everyone, gave a brief overview of what the purpose of the trip was and then spoke about 3 (1 for each Founder) top-line objectives for the next year. We spoke for an hour between us and then we STF down. From then on, it was about everyone being together.

Having sat down, we’d then planned a pretty busy schedule of group activities: tasks, cooking together and hiking over three days. In the end we dropped the cooking and were only able to do 2 of the 3 tasks we had planned for the trip. The reason being, even with 35 people, herding everyone from place to place is hard. People always disappear and things take longer to do than if there were just 4 or 5 of you. Also, with people flying into Europe from all over the world, they were tired and/or jet-lagged. They needed some down-time.

Did it matter that we didn’t do everything we wanted? I’m not sure it really did. The main purpose was to get people spending time together and learning about one another.

Some people are extroverts, some aren’t

We mixed people who didn’t tend to work together normally into groups to respond to some specific tasks. We gave each team a brief and they had an hour to come up with a response and create a presentation to give back to the group. Inevitably, the loudest people tended to dominate the discussions and were the ones who presented. However not in all cases: at least one person said they were pleased that they’d pushed themselves out of their comfort zone and presented to the group. Maybe next time the Founders could try and encourage the naturally quieter people to present back. After all it’s a friendly audience and sometimes that little nudge is all you need to realise it’s not quite as scary as it may have seemed.

The accidental fire-pit was a massive hit

We chose our location, a huge ski lodge (outside of ski season) mainly because of the space and the stunning mountainous scenery. It also had a pool and a sauna. But the thing that was universally popular was the fire-pit located around the back of the lodge. We didn’t even know it had one until we got there. But every night it was dutifully lit and the team gathered around in the dark, drinking, chatting, dancing, singing. There’s something comforting about standing around a fire. We don’t do it enough.

Hiking got the best feedback

On one of the days we originally thought that we would spend an afternoon going for a hike. We realised though that the best hike in the area was more like a 5 hour round trip. With lunch thrown in, make that 6–6.5 hours. There was no way we were going to do that in one afternoon. So we abandoned the third task and set off after breakfast to the foot of the mountain. I think everyone was a bit surprised at how steep (and therefore physical) the hike ended up being. But again, there is something about humans that we bond when we overcome something together. The most positive feedback we got was all about how walking with someone you’d not met before meant that you really got to know people in a way that you could never do in a conference room.

Not everyone wants to do what you think might be fun

If you are really into skiing, or mountain biking, or yachting, or go-kart racing — the danger would be to assume that everyone else is, too. Some people just aren’t. A couple of people decided not to come on the hike. That was fine, but we probably should have thought about alternatives. We’re about to go on a conference run by our investors and they’ve come up with 3 options for the activity day — it makes sense.

Taking people out of work is a leveller

If you do it right, your meet-up/conference/escape/retreat should be hierarchy free. Nobody is anybody’s boss. Nobody is telling another person what they want them to do. As Founders you might find you’re on the receiving end of people’s pent up frustrations as they feel they can let themselves speak freely, but ultimately that’s all good, too.

We ran a survey after the event. From that we could tell that we did a good job and overwhelmingly people felt warm and optimistic about being a part of ScreenCloud as a result. There was a real sense of gratitude that we had invested the time, money and effort into getting the event set up. We also learnt that you will never please all of the people all of the time. Anyone who runs a business knows this about their customers, so it should come as no surprise that your employees are the same. But overall it was a very positive response and we’ve got a good sense of where to take things next time.

Bring on ScreenCloud Together 2019!

4 Months as a Remote Developer at ScreenCloud