In the summer of 2019, we decided to travel from London to the west coast of the U.S. to meet ScreenCloud customers for a case study tour. Here’s what we learned. 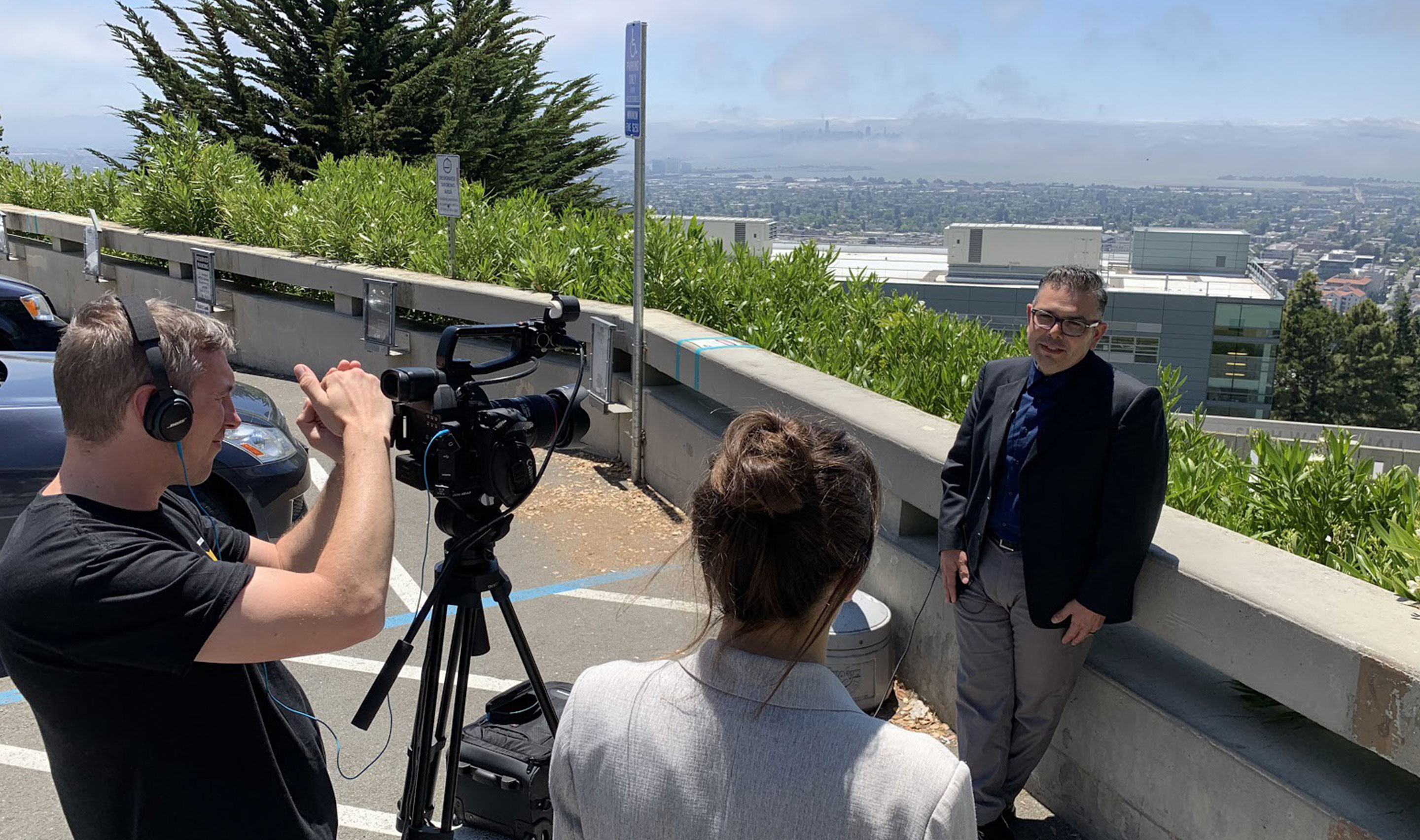 We’ve always been committed to telling customer stories at ScreenCloud. Digital signage is still a new enough industry that people want to see how peers in their field are using screens. From the early days, we were convinced that getting one-on-one time with companies was how we would learn and make our product better. Which is often unusual in SaaS, where a lot of conversion happens online, or through automated services.

So when our Founders suggested that it would be a good idea to try and get in front of some US customers, and to film case studies with them, we knew it was a good idea.

This week, we returned from our first customer case study tour, having spent seven nights in San Francisco and two in LA, with:

Here’s what we learned from the experience.

1. Three months is probably the optimal amount of planning time

Before we started planning our customer tour we reached out to some of our friends in SaaS to get advice on how we should approach it (shoutout to our buddies at Chargebee and Geckoboard!).

General consensus was that three-six months of planning time was ideal. Unfortunately, we only had six weeks as the trip needed to be before the UK summer holidays, due to the commitment of our team and various trips that were already planned.

Our “magic number” was 10 case studies and we ended up achieving 9 (we were unable to film on two visits in the end due to restrictions). In terms of customers, we reached out to more than double that amount, so had about a 50% success rate.

In hindsight, so long as you’re organised, I’d say two months is probably enough time but three months would have been better. Here’s how we broke that schedule down, but you could spread things out if you had the luxury of a few more weeks:

With 7,000 customers, one of the problems we have is that no-one knows all our customers and where they’re located. One method we used to find customers in specific areas was taking information from our billing platform and using it to plot customer location (anonymously, of course, we got you GDPR) on a map. We used Maptive to do this (example graphic below). After changing a few settings, you can have different pins for different ACVs or different verticals so it’s super easy to find customers in the area.

Even within San Francisco some of the areas were an hour’s drive away, so we then split the time we had available by location. Deciding to do one day in Berkeley, a few days in downtown San Francisco and one day in Silicon Valley. The downside was that our customers in those locations would have to be free on those specific days, but it allowed us to maximize our time away.

This is when we began sending out emails. Here’s what our customer outreach template looked like:

It’s Beth from ScreenCloud here. My colleagues Tony, Ben and I are going to be in San Francisco on June 18th looking to visit ScreenCloud customers. We’d love to meet you to:

We know that you’re super busy but it would really make our day to learn from you. We predict that it’ll be a maximum of two hours, and we’re very well-behaved guests.

If that sounds good, you can book one of our visiting slots here.

Really hope to meet you soon.

We used Calendly to allow customers to book a slot, without going back and forth.

At this point we had filled up roughly half of our slots. Most of the customers had either booked a slot immediately, or didn’t reply at all. At this point we began reaching out to more customers in the areas. Another benefit of using Calendly meant that no one could double book and would see if we’d run out of slots.

By this point we had filled all of our slots. We then sent a second email confirming important details with those who had booked meetings such as:

What we might have done had we had more time

Even if we’d had the “optimal” three month planning period, I still would have waited until 4–5 weeks before to start outreach to customers. Three months is way too long a lead time to book meetings in and I’d imagine we would have had far more cancellations had we done this.

However, a bit more lead time would have probably helped us with more customer research and segmenting targets. Luckily, myself and Ben, our Sales Development Exec, were both on this so we could share the workload but it was still quite a commitment alongside the day-to-day, to get everything done.

We could also possibly have saved more on the travel costs if we’d reserved flights and accommodation in advance, as we ended up paying slightly more booking things only six weeks out.

2. Offer something in return

As you can see, we didn’t go straight in asking for the testimonial video. We packaged this up with an offer of something for the customer (a strategy session), something exciting that they could only get by seeing us (a new product demo) and finally, the request for a video.

In the past, we’ve had a lower success rate getting customers to agree to case study videos so I think the 50% success rate achieved on this trip was largely down to the packaged offering.

A lot of companies suggested offering swag as a reward, which we did as well, but this was much more tangible and probably meant we could justify a two-hour meeting, which is an awesome amount of time to spend with a customer.

We only offered two appointments each day, usually one in the morning at 10am and another at 3pm. It was easy to feel tempted to pack in more meetings, particularly if they were in the same area, but we’d had advice to stick to two per day maximum.

In hindsight, this was exactly the right amount. It meant that we made every single meeting on time, even allowing for San Francisco traffic (bad) and trying to get parked. It gave us a little headspace between meetings to discuss findings, write up notes and eat (so many good delis).

I also wouldn’t have anticipated how tiring these meetings would be before we did them. Two per day allowed us to keep up a good energy level for each of them, rather than turning up tired and not at our best.

4. Only get the camera out, after you’ve built a rapport

We always left the filming to the end of the meeting. By this time we had built a bit of a rapport with the customer, we knew any questions to avoid and we knew exactly how they were using the product, allowing us to get the best from their interview.

A great tip our Video Producer Tony gave us was to chat to the customer further whilst he set up the video equipment. This kept them relaxed and stopped them from freezing because they saw a camera in the room.

I actually really enjoyed this part as it was a chance to learn more about the individual, like where they were from, or how long they’d worked at the organization. We also got some great local recommendations!

We also tried to make the video interview fast, capturing as many soundbites as possible in one take.

Something we’d love to do in the future is longer case study videos, rather than the short testimonials we captured, but as this would require more production and more of the customer’s time, we’d need a different approach.

The main thing we learned from this trip was how much people love to feel heard by the products and brands they commit to and spend their money on. This is something that we all know about B2C, but that often gets missed in B2B.

For many of our customers, this was the first time a software product had asked to come in and hear their feedback. Sure, they got asked to fill in surveys or contact a support centre, but to see us visiting face-to-face, looking for their opinion and to support their use of ScreenCloud, made them really happy.

On our side, it was a great reminder of why we do what we do. Going into a school and seeing how the Marketing & Communications Manager uses digital signage to help students to develop their skills because he’s so passionate about providing them skills for the real world, was incredibly inspiring. That ScreenCloud is the product that makes this happen makes our work feel incredibly worthwhile.

Okay, we’re not saving lives, but we know the actual people we’re trying to help so much better now. We have ideas of how we can make our product even more useful for them, so that their schools, organizations, departments and internal culture, gets better and more nuanced.

Even without the great videos we now have for marketing, this insight alone made our trip worthwhile.

So would we do it again?

Without a doubt, yes. The trip in total, including all travel and team expenses came to around £10k ($12.5k). That’s a big commitment for a startup, but compared to the 9 video case studies we walked away with, plus the insights and learning we gathered, we imagine we’ll get return from it pretty quickly.

We also think it would be cool to change the teams going out on these customer tours, and to do more even if we aren’t necessarily filming case studies, just down to the sheer amount we learned about our customers.

Big shout out to Ben and Tony, my tour buddies, and ScreenCloud’s Founders for giving us the support to make this happen!

If you have or are about to create a customer tour, I’d love to hear what you learned and what you might do differently!